We all love watching cooking shows and drooling over the recipes, right?  Our members also love cooking and we are sharing recipes that they have put into our past newsletters.

Click on any of the tabs for the full recipe and find links so you can easily print them out for your own use!  We will be adding more in the coming months.

In a large mixing bowl, whisk together the flour, cinnamon, nutmeg, baking soda and salt until well combined. Stir in the rolled oats and set aside.

Using a handheld mixer beat the butter, brown sugar and granulated sugar together for 1 or 2 minutes or until fully combined. Mix in the egg and vanilla extract, scraping down sides as required.

Add the dry ingredients to the wet ingredients and mix well. Gently fold in the chopped apples.

Remove from oven and allow to cool. Store in airtight container for 2 to 3 days. 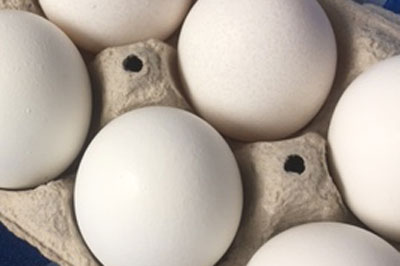 Instructions
Crack the eggs into a medium-sized bowl. Add the salt and pepper. Whisk together until yolks and whites are blended.

In a medium non-stick pan, heat the butter over medium heat until melted.

Add the eggs to the pan. Cook, stirring gently, until the egg mixture is set but still soft, about 2
minutes. Spoon the eggs onto each warm tortilla. Add your favourite tasty toppings. 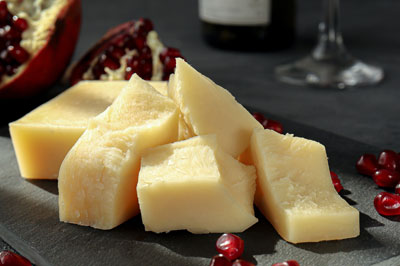 Blend in food processor until a uniform “slurry”. Then add pickled jalapeno slices – hot. Start with 2 Tbsp. Finally, add: 400g of grated old cheddar cheese. Mixture needs to become stiff. So, you may need to add up to 500g of grated cheese. At this point, you could add more jalapeno slices if you desire more heat. But do it in moderation! Line a small bowl with wax paper. Shape cheese into a ball & place into the bowl. Refrigerate for 2 to 8 hours – the longer the better. Optional: Before serving, roll cheese ball in finely ground walnuts or pecans. Serve with corn chips, veggie slices, crackers… & our newest cider – Strawberry Lime – would be a perfect match. Cheers! 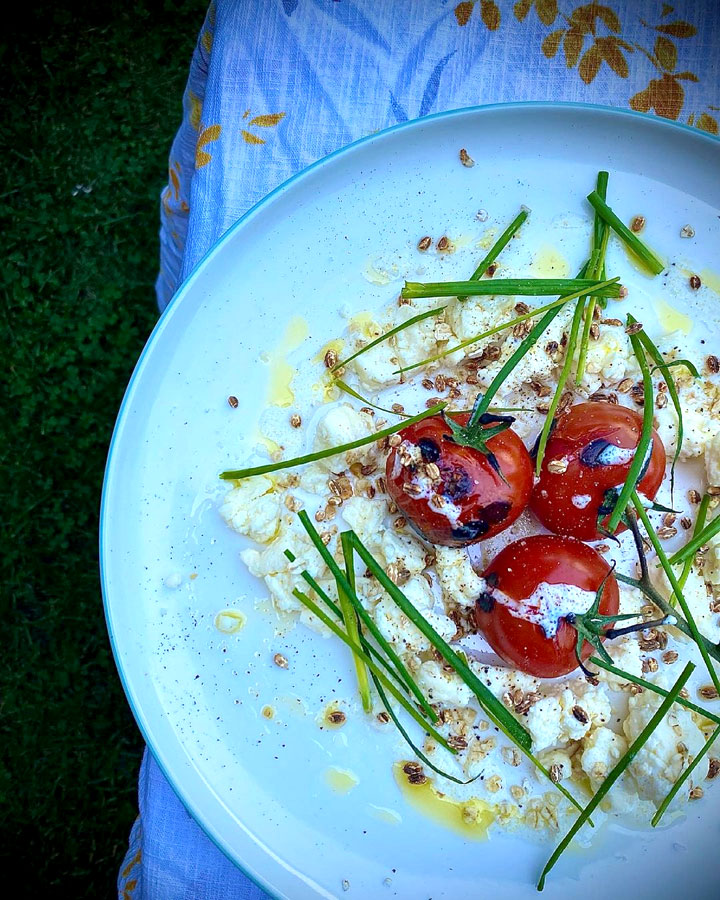 Place tomatoes on a serving platter and arrange cheese curds around them. Spoon reserved dressing over top of tomatoes and garnish with chives, oats, and barley and remaining 1 tbsp olive oil and serve.

Directions
Mix all ingredients together. Pour into unbaked pie shells. Bake at 450 degrees for 20 minutes
then 350 degrees for 25 minutes or until set in the center (Slide a knife into center and be sure
it comes out clean). Cool and top with fresh whipped cream. Makes 2 pies. 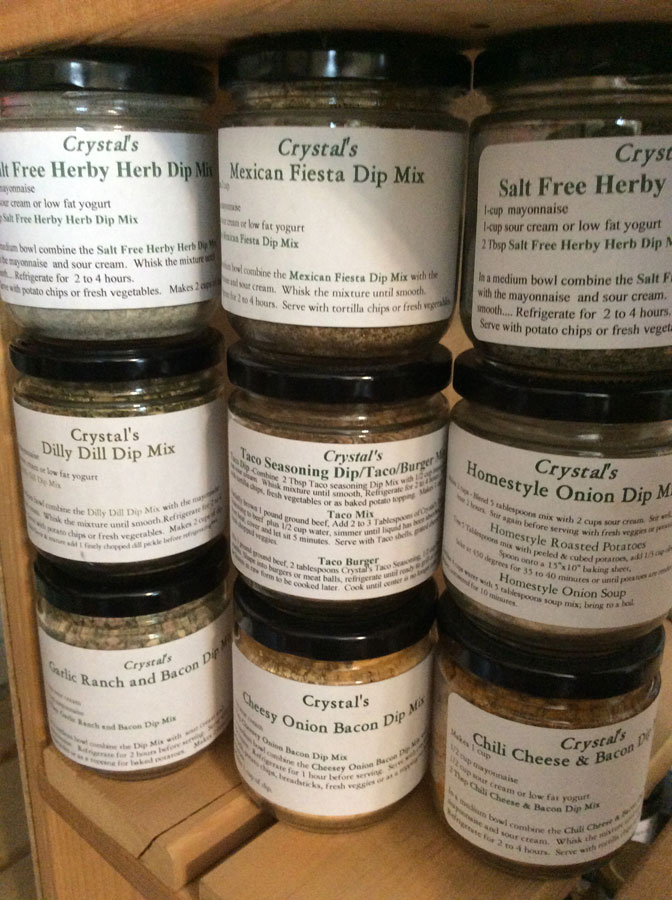 Directions 1. Scalloped potatoes, add 1 to 2 tablespoons Herby herb dip mix or Dilly Dill Dip mix to your baking dish when layering the potatoes, or add it directly with your white sauce for added flavour. 2. Whipped or mashed potatoes, add 1 tablespoon Garlic and Chive dip mix or Dilly Dill Dip Mix to your butter and milk as you mash or whip. Let these potatoes sit for five minutes with lid on to enhance flavor. An easy pot of delicious potatoes fit for company, but loved by the whole family. 3. Baked potatoes, instead of using plain sour cream or butter to top your baked potato, try any of our dips in prepared form. We enjoy the Garlic Ranch and Bacon dip on our baked potatoes. 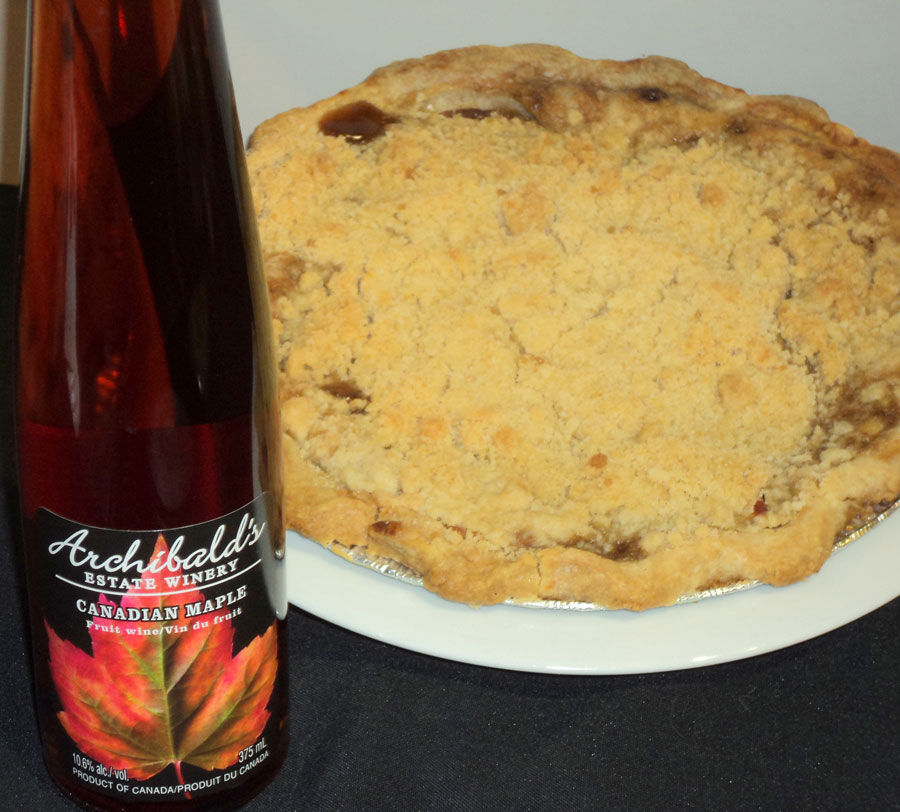 Gallery on the Farm Appetizer Meatballs

In a bowl, combine the meatball ingredients. Shape into 1-in. balls. Place meatballs on a greased rack in a shallow baking pan.
Bake at 350° for 10-15 minutes; drain.

Combine ketchup and cornstarch in roasting pan. Stir in jellies; add the meatballs. Cover and bake for 30 minutes or place in slow cooker to keep warm for guests. ENJOY!

DIRECTIONS
Preheat oven to 450°. Line a large baking sheet with parchment paper. Cut mozzarella sticks into 1” pieces and set aside.
On a floured surface, divide pizza dough into two pieces. Stretch and roll each piece of dough into a long rectangle, then cut dough into 2” squares (you’ll need 33 total).
Wrap a dough square around each piece of mozzarella, forming a tightly sealed ball. Place balls seam-side down on the baking sheet in the shape of a Christmas tree (they should be touching). Brush egg wash on dough balls and bake until golden, 15 to 20 minutes.
Meanwhile, whisk together melted butter, Parmesan and herbs. Brush on baked pizza balls. Serve warm with marinara for dipping.

A light, refreshing dessert – just in time for spring!
Filling (make this first so it can cool while the cake is baking)

Line a 11 x 16 inch jelly roll pan (a cookie sheet with a lip) with waxed paper – greasing the top of the paper. Pour the batter in and spread it evenly over the pan. Bake 12 to 15 minutes in a 375 degree oven or until it springs back when gently poked with your finger. As soon as it is cooked, turn out onto a tea towel that has been sprinkled with white sugar. Gently peel off the waxed paper and spread the cooled filling on the cake. Using the tea towel to help you, roll the cake up and wrap it in the tea towel until it is cool. Slice and enjoy!

Make this delicious French toast the night ahead so that you can enjoy Easter morning without the work.

Directions:
Grease a 9×13 inch baking dish.
Place half the bread cubes in the dish and top with cream cheese cubes. Sprinkle 1 cup blueberries over the cream cheese, and top with remaining bread cubes.
In a large bowl, mix the eggs, milk, vanilla extract, and syrup. Pour this mixture over the bread cubes. Press down the cubes in order to “soak” them and make them “French toast-like”. Cover and refrigerate overnight.
In the morning, remove the bread cube mixture from the refrigerator about 30 minutes before baking.
Preheat the oven to 350 degrees F (175 degrees C).
Cover, and bake 30 minutes. Uncover, and continue baking 25-30 minutes, until center is firm and surface is lightly browned.
In a medium saucepan, mix the sugar, cornstarch, and water. Bring to a boil. Stirring constantly, cook 3 to 4 minutes. Mix in the remaining 1 cup blueberries. Serve this over the French toast and enjoy!
Reduce heat, and simmer 10 minutes, until the blueberries begin to burst. Stir in the butter, and pour over the baked French toast. Enjoy!

Add 1 tablespoon olive oil to a large skillet and place over medium high heat. Add beef, season with salt and pepper and brown in batches, so that you give the meat room for a nice sear. This should take about 5 minute per batch of meat. Transfer to large 6 or 8-quart slow cooker.

Next add in beef broth, dry red wine, tomato paste, Worcestershire sauce, balsamic vinegar, thyme and salt and pepper. Stir together with the beef until combined, then add in garlic, onion chunks, carrots and diced potatoes. Cover and cook on low for 7-8 hours or on high for 4-5 hours. I prefer to cook this slow and low so that the beef become really tender and the flavors have time to meld together.
Next, remove 1 cup of beef broth from the slow cooker and transfer to a medium bowl. Whisk in ¼ cup flour until there aren’t any lumps remaining. Add back to the slow cooker and stir to combine. Add in frozen peas and cook uncovered on HIGH for 10-15 more minutes until beef stew thickens up a bit. Serve immediately! 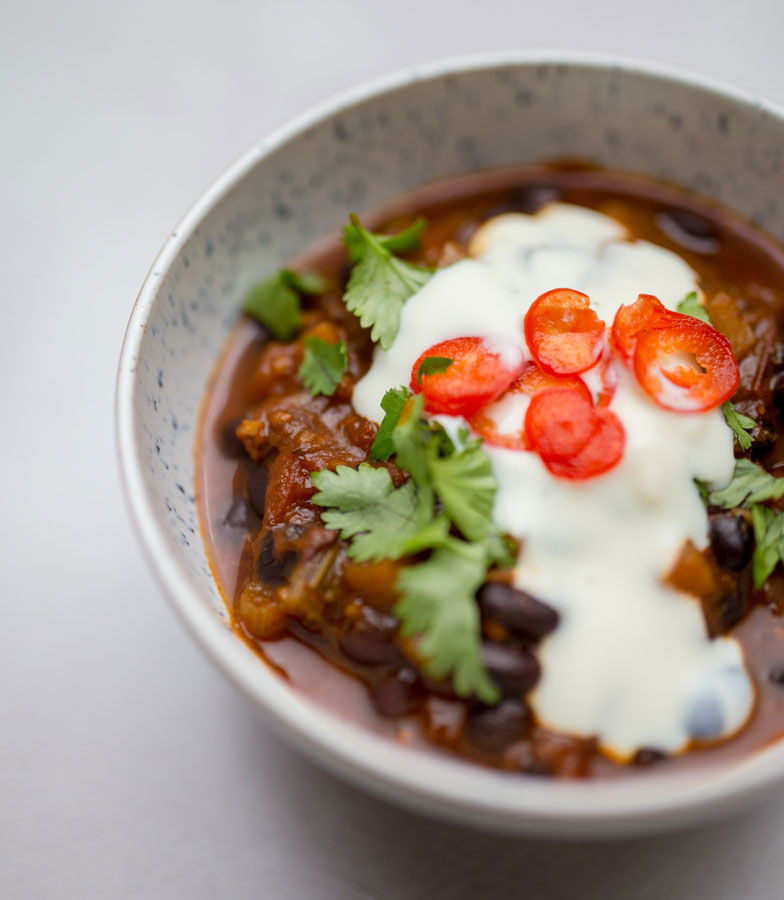 Heat oil in a large and deep non-stick skillet over medium-high heat.
Add onion and saute 3 minutes, then add garlic and saute 30 seconds longer. Pour onions into slow cooker.
Return skillet to medium-high heat, add beef and cook stirring occasionally until beef has browned. Pour browned beef into the slow cooker.
Stir in diced tomatoes, tomato sauce, beef broth, chili powder, cumin, paprika, cocoa powder, sugar, coriander and season mixture with salt and pepper to taste.
Cover with lid and cook on low heat for 5 – 6 hours.
Stir in kidney beans and allow to heat through, about 2 minutes. Serve warm with desired toppings.
*Note: You can always add corn, squash, chickpeas, etc. to pot and serve with sour cream and cilantro to spice things up! I often save any left overs to serve over nachos and cheese.

Gallery on the Farm Hamburgers 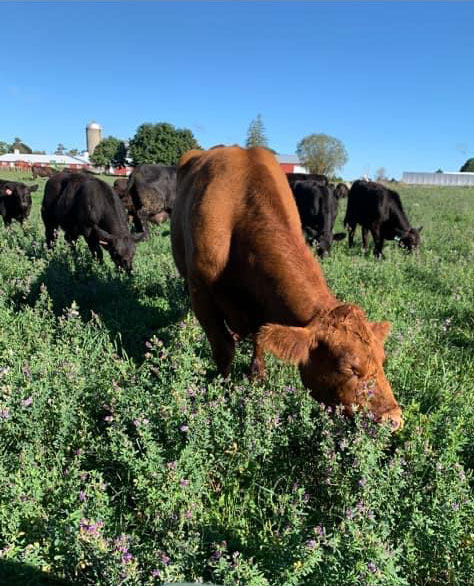 Form into patties and grill! Pairs great with a strawberry, cucumber and watermelon salad. Enjoy! 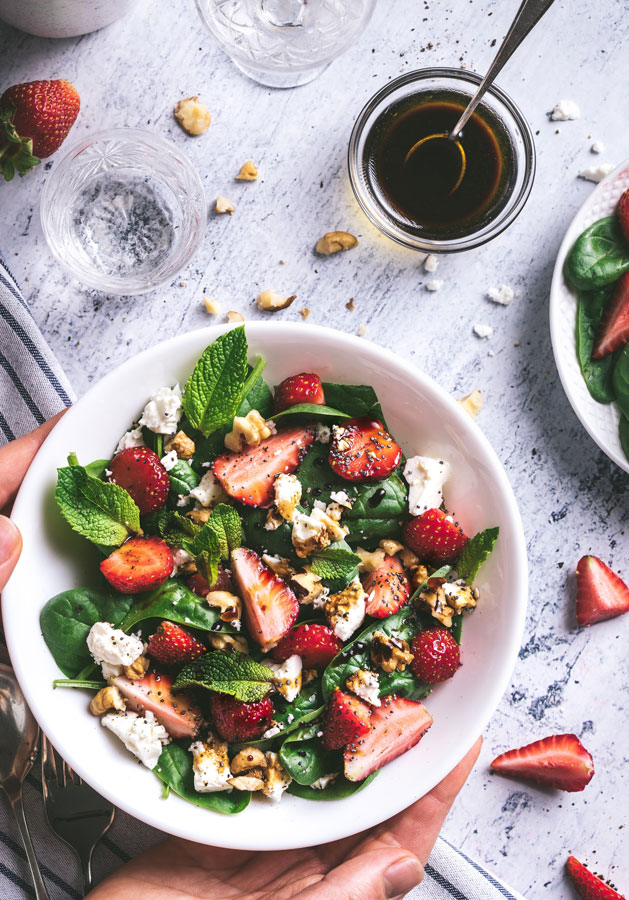 Whisk all ingredients well and serve! 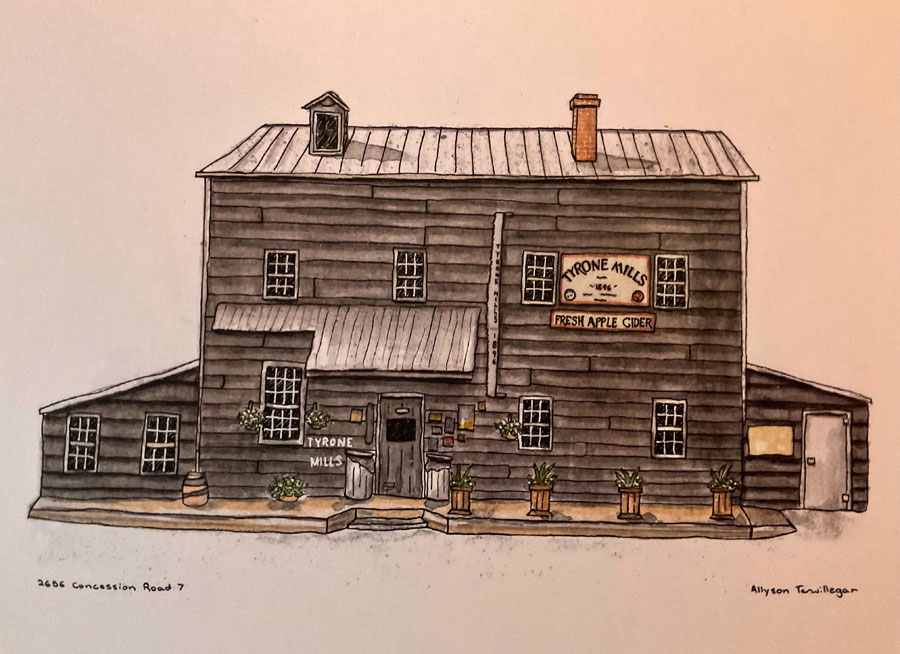 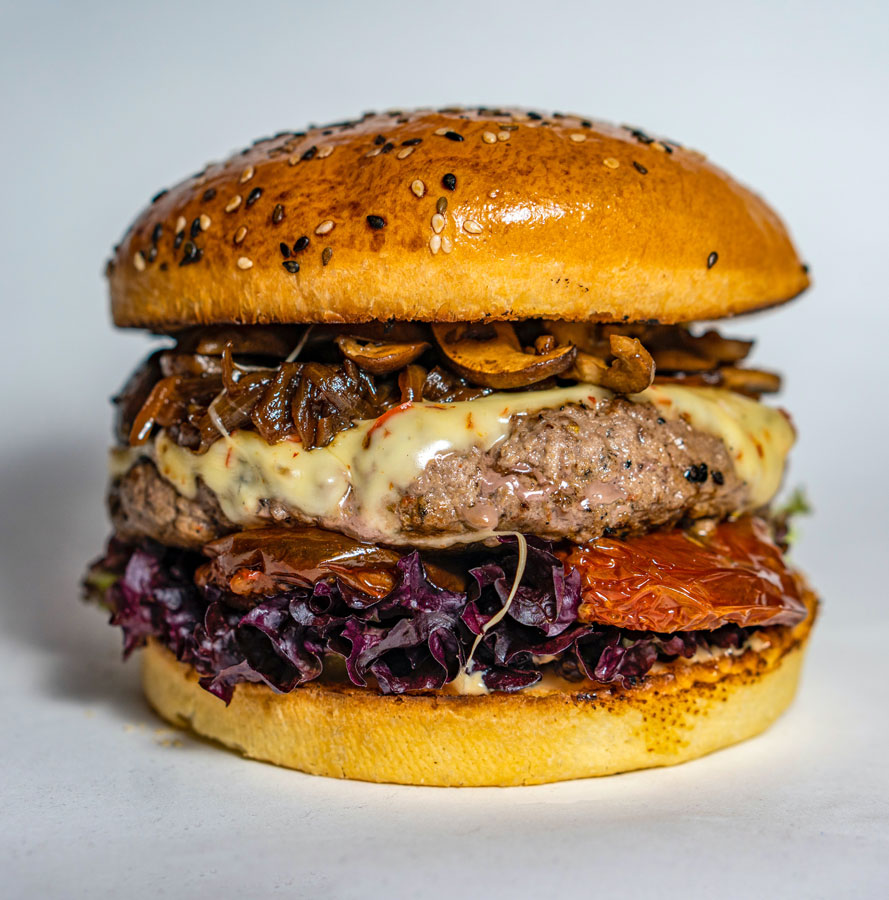 Shape into burgers. Refrigerate until ready to grill or cook, can be frozen in raw form to be cooked later.

Cook until Center is no longer pink.

Gallery on the Farm Chili 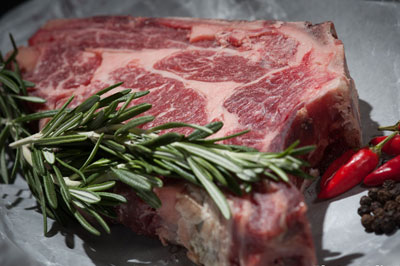 Directions:
Heat olive oil in a large stockpot over medium heat. Season steak with 1 teaspoon salt and 1
teaspoon pepper. Working in batches, add steak to the stockpot and cook, stirring occasionally,
until evenly browned; set aside.
Add onion, carrots and celery. Cook, stirring occasionally, until tender, about 4 minutes.
Add garlic and cook, stirring occasionally, until tender and browned, about 4 minutes.
Whisk in flour and tomato paste until lightly browned, about 1 minute.
Stir in wine, scraping any browned bits from the bottom of the stockpot.
Stir in beef stock, thyme, bay leaves and steak. Bring to a boil; reduce heat and simmer until
beef is very tender, about 30 minutes.
Stir in potato; simmer until potatoes are just tender and stew has thickened, about 20 minutes.
Remove and discard thyme sprigs and bay leaves. Stir in parsley. Enjoy! 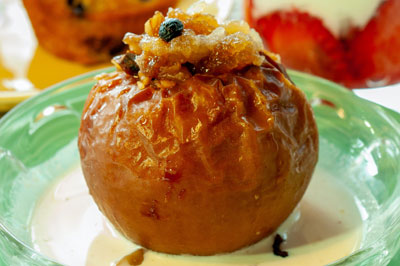 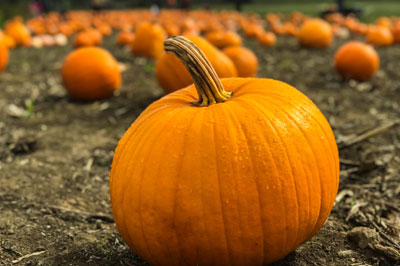 Add the dry ingredients to the wet ingredients and blend just until combined and no streaks of flour remain.

Add batter to the prepared pan. Bake at 350 degrees for 60-70 minutes or until cake tester inserted in center of loaf is clean.

Baking Directions:
Preheat oven 375F
In a large bowl, mix together all the above ingredients.
Add 1 egg, 3/4 cup butter and 1/4 cup of molasses (room temperature)
Beat together using an electric mixer on medium high until combined.
Refrigerate 20 minutes.
Lightly spray or cover with parchment paper 2 cookie sheets.
Make 1 inch balls, arrange on prepared sheets 2 inches apart.
Bake in center oven until cookies are golden 10 to 12 minutes.
Remove to a rack to cool completely.

In a shallow dish, whisk together eggs, milk, cinnamon and ½ tbsp. maple syrup.

Working one slice at a time and using tongs, dip bread into egg mixture until fully soaked on each side. Cook both slices of bread at the same time until golden, about 3-4 minutes per side.

The traditional blend is half & half Hard Cider to orange juice. However, you can vary the ratio
depending on your palate. The more orange juice, the sweeter it will be. Whichever ratio you
choose, remember to pour the Hard Cider first!